We are grateful to all those who contributed to LM1’s Kickstarter and fund its Prep Stage.

As described on our Kickstarter website, the objective of the Prep Stage was to arrange for underwritten sponsorship of four professional management teams (mission, science, marketing, education). This would take about 6 months and the teams would then proceed to set up the main project over about 3 years.

At the end of this longer Setup Stage the teams would have contracted with commercial and government partners for the space mission, confirmed the lunar science and agreed the instrument package, prepared for global sales and marketing, researched and planned the public archive, and piloted the global education programme. From this point, LM1 would be on a secure footing.

In short, the Prep Stage gets us "off paper" and prepares the way for setting up the main mission arrangements.

The campaign raised £672k of pledges, of which £661k was collected by Kickstarter. Kickstarter itself took £54k in fees, leaving £607 for LM1’s Prep Stage.

The Prep Stage actually lasted 9 months, and this is how the backers’ money was spent: 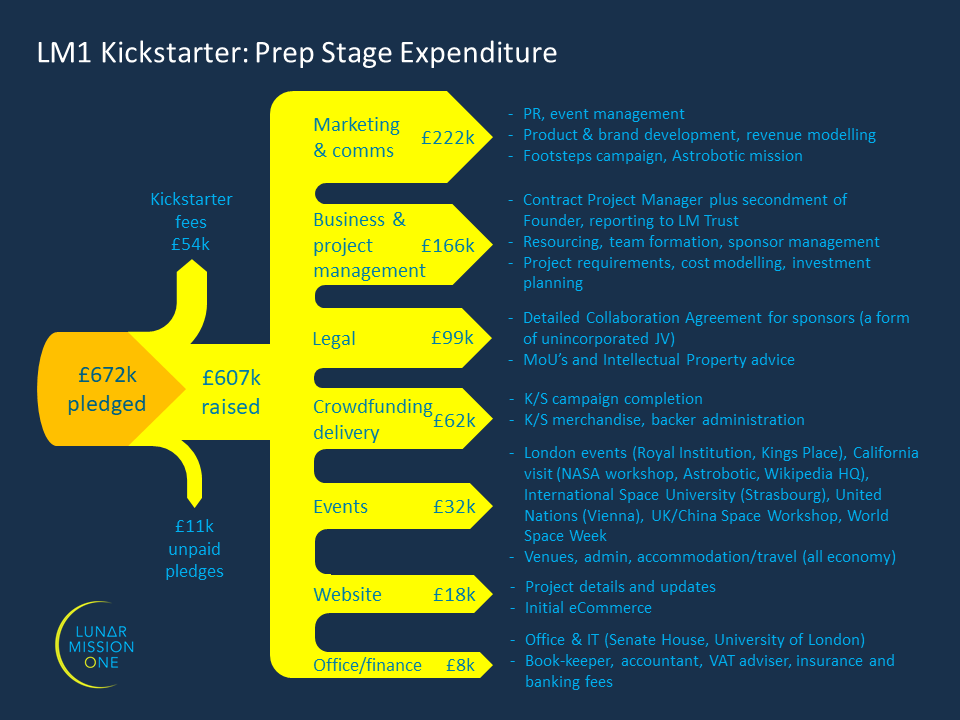 Marketing and communications: £222k
This went on ongoing PR, event management, product development, brand development and revenue modelling. In particular we planned for sales and marketing for the subsequent stage, starting with our “Footsteps on the Moon” campaign, and that included initial contract fees to Astrobotic (at the time part of GLXP, but now proceeding independently).

Business and project management: £166k
This paid for a professional project manager and the secondment of our Founder from his employer. Together they provided project management, planning and reporting to the Lunar Missions Trust. They handled resourcing and team formation and engaged with sponsors, both corporate and institutional. They also further developed the project requirements, cost modelling and investment plan.

Legal: £99k
In support were lawyers who drafted a formal and detailed (and quite complex) Collaboration Agreement, a form of unincorporated joint venture, that provided for the underwriting of sponsorship with the provision of ongoing resources for the Setup Stage. It also paid for interim MoUs and IP advice.

Crowdfunding delivery: £62k
This went to complete the Kickstarter campaign and paying for the provision of its merchandise (T-shirts etc) and the administration of our backers.

Events: £32k
We organised and ran a public event at the Royal Institution in London in May, and an event for higher value backers at Kings Place in London in July. We also sponsored and took part in World Space Week in September. We paid a visit to California in July, for a workshop with lunar scientists at NASA Ames and to launch the US campaign with Astrobotic. While in California we also met with officials at Wikipedia HQ. We attended and presented to the International Space University in Strasburg in February, to the United Nations (the main committee of COPUOS) in Vienna in July, and to the UK/China space workshop in Newbury in September. Costs included venues, administration, accommodation/travel – all economy or budget class.

Website: £18k
The website we presented at the Kickstarter needed properly fleshing out with the detail of the project, including its science, technology, marketing and educational public engagement. This we did, updating its story and including initial eCommerce.

Office & finance: £8k
This paid for an office at Senate House, the University of London, a bookkeeper for cash accounting, a qualified accountant for statutory reporting, a VAT advisor, insurance and banking fees.

Trust & Trustees: £0
No cash went to the Trust or Trustees. Trustees actually made personal cash contributions to the Prep Stage which have not been repaid.

We understand that many of our original backers had hoped to see the next stage carry on straight after the Prep Stage. So had we. However, this project was complex and highly innovative and many elements needed to come together, and the cash funding for our next stage did not materialise, though sponsored in-kind funding did continue.